2024 Olympics in DC: Everybody Wins

The U.S. Olympic Committee will decide soon whether to promote an American city to host the 2024 Summer Olympics, and Washington, D.C. is an inspirational contender: a beautiful, living city with tremendous physical and cultural assets.  With multiple existing or planned sports venues, some 50 miles of waterfront, a walkable city with a well-developed transit system, and incomparable public space, Washington would be a superlative choice.

The Potomac and Anacostia Rivers provide a continuous waterfront experience in D.C. with many nearby sports venues. (Image credit: Colonial Rowing Camp)

Washington is ideally positioned to host the games: in addition to its excellent array of sports venues, it has a vast existing capacity for tourism and is the fifth-largest regional economy in the nation. Olympic host cities such as London and Los Angeles have successfully capitalized on their investments, and Washington would be able to do the same. Many arguments have been made against taking on the burden of hosting the Olympics: the danger of overbuilding, rampant costs, the impact of crowding, the threat to other economic activity. However, the examples given are usually connected to winter Olympic sites—such as Lake Placid, Lillehammer, and Sochi—where the small size of the community inevitably required a tremendous level of investment with an uncertain future for the facilities. 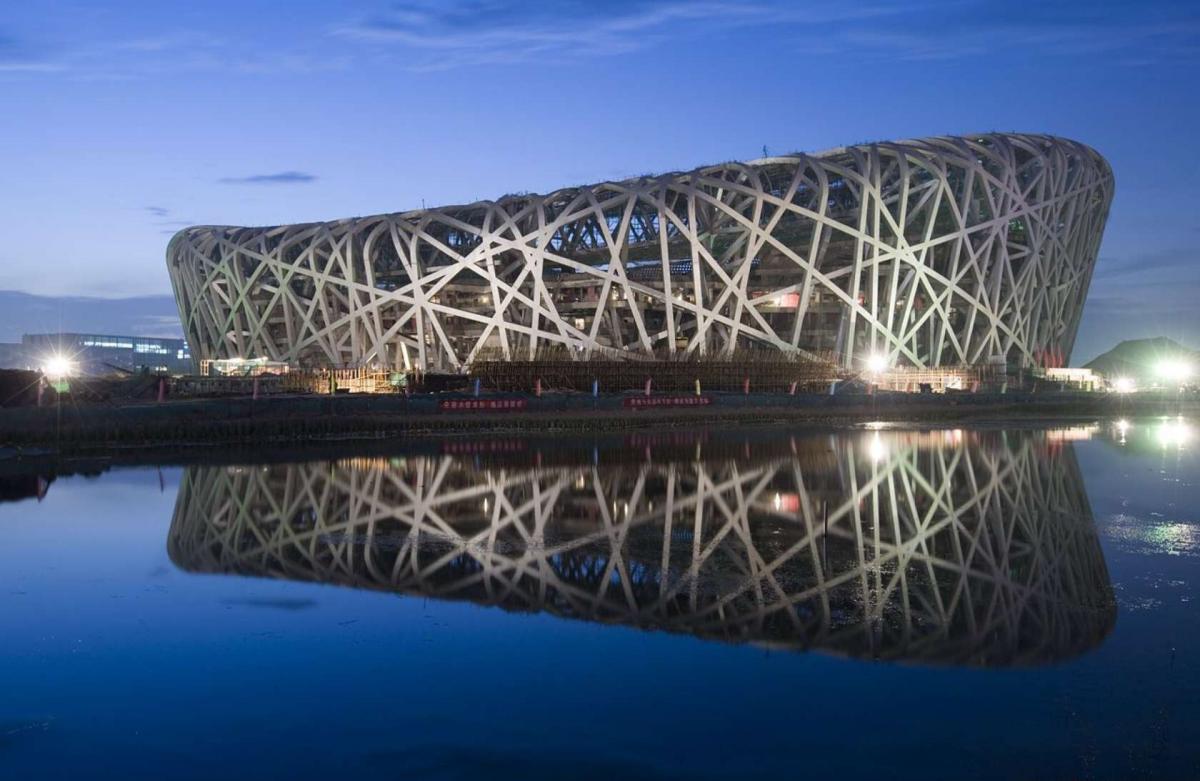 The 2008 Beijing Olympics provided that city the opportunity to create public infrastructure with a strong design identity, such as the Bird’s Nest Stadium by Herzog & de Meuron. (Image credit: Architizer.com)

Washington presents much better possibilities. Well in time for 2024, there will already be numerous new sports facilities within sight of the city’s monumental core: the Long Bridge aquatic center in Arlington, a state-of-the-art basketball gym at Georgetown University, a soccer stadium in the Capital Waterfront neighborhood. By then, both the South Capitol Street gateway and Frederick Douglass Bridge and the visionary 11th Street Bridge Park may be constructed, as well as a rail connection to Dulles Airport. By 2018, the redevelopment of the Washington Channel waterfront, The Wharf, will also be completed, creating a new urban experience within easy walking distance of the National Mall. As envisioned by many planning studies, the city’s waterfront—from East Potomac Park and the Channel to the Navy Yard to Poplar Point and the lower Anacostia River—is a tremendous environmental and recreational asset on the verge of becoming a world-class waterfront destination. 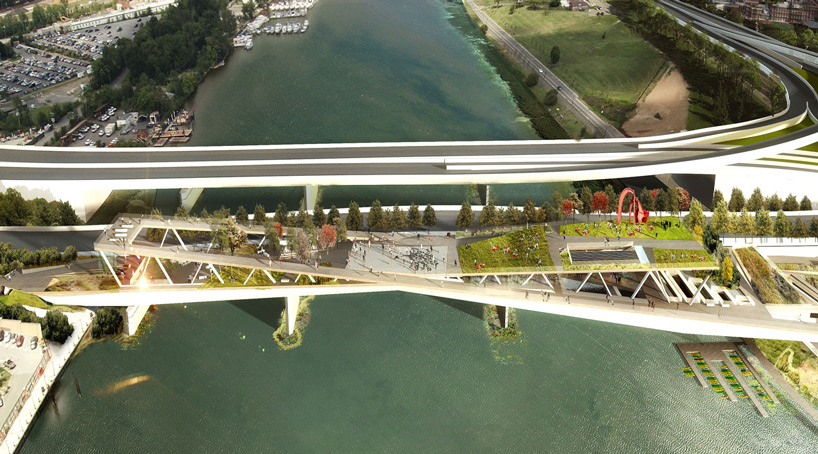 The 11th Street Bridge Park project would link neighborhoods on either side of the Anacostia River with public recreation facilities. (Image credit: © OMA)

Great opportunities to improve public infrastructure happen rarely, perhaps every other generation. In Washington, the 1901 McMillan Plan created the comprehensive public park system for the city that was built over the next decades. The 1960s and early 1970s resulted in more civic investments such as the recreation centers across the city, the RFK Stadium, and the National Park Service’s renovation of the National Mall. While the city has seen continued development, the time for comprehensive coordinated investment in Washington’s public infrastructure is ripe to transform the Anacostia and rehabilitate the collapsing East Potomac Park waterfront. 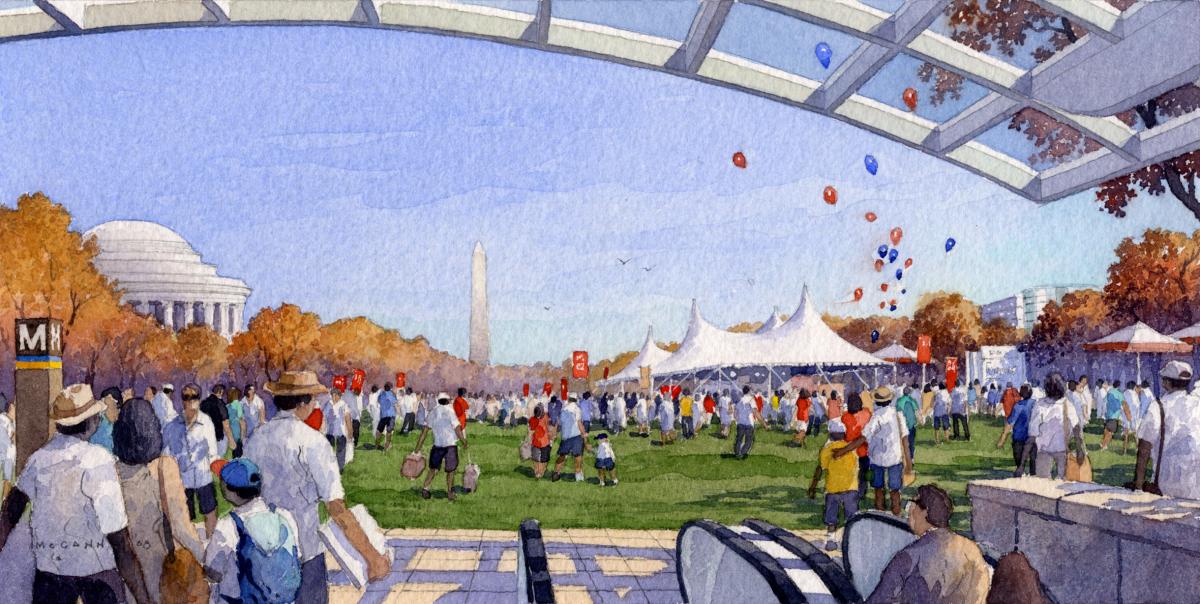 Washington offers a unique and symbolic platform to showcase American history and culture like no other city, and its waterfront topography is ideal for creating a compact, interconnected series of competition venues from RFK Stadium to Georgetown. The city can benefit from large-scale reinvestment in its public infrastructure—whether a new Olympic-scale stadium, the development of Poplar Point, or the reinvention of East Potomac Park. Unlike in the past, the impetus needed to achieve this scale of improvement is not likely to be led by the public sector alone. The 2024 Olympics can provide the incentive to present this city’s spectacular qualities to an international audience while creating long-term value for its residents. 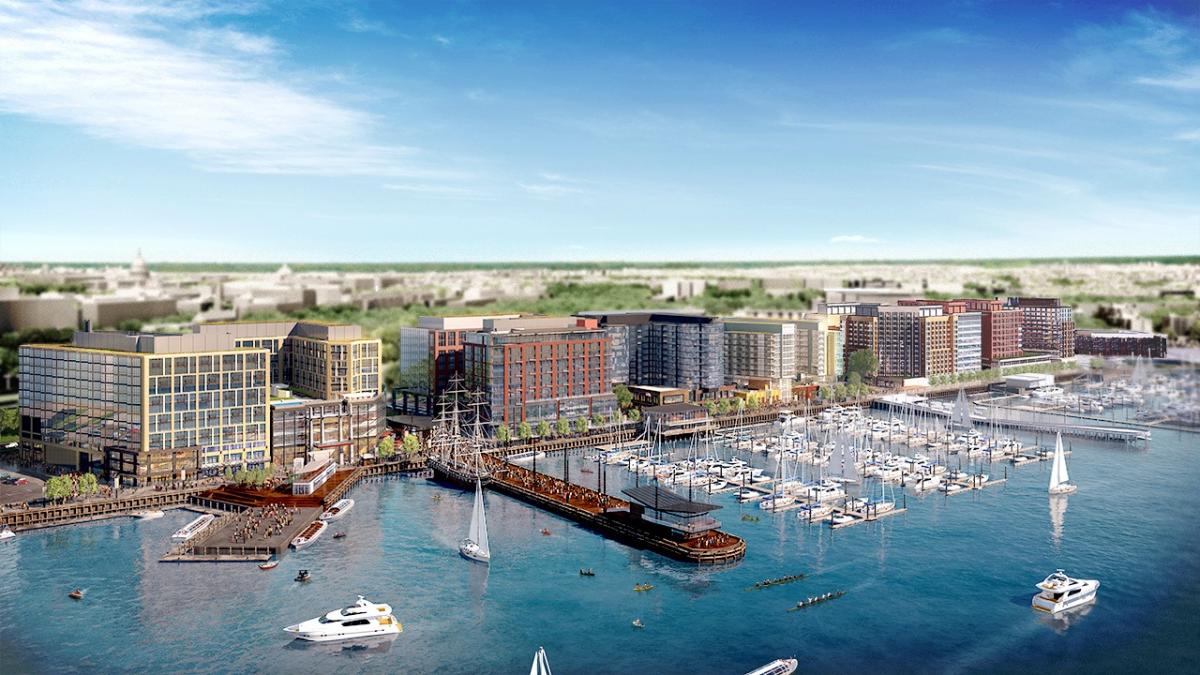 The Wharf development on the Washington Channel brings an urban experience along the city’s waterfront within walking distance of the National Mall. (Image credit: Perkins Eastman)

A terrific infrastructure and economic boon for D.C. New commercial development as well as redevelopment of existing areas in need of a facelift.
Permalink